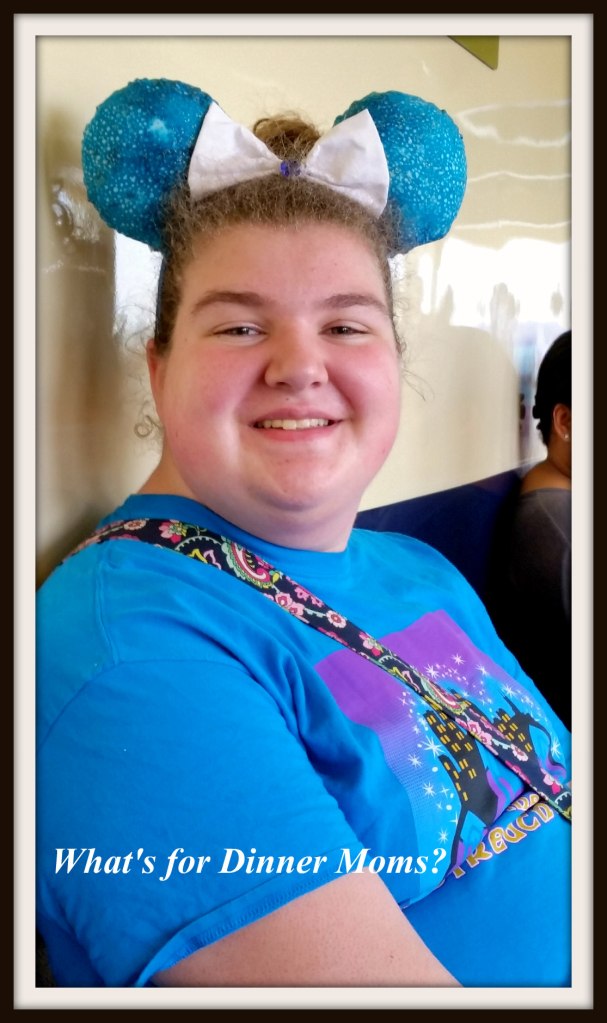 My daughter wearing one of the 12 pair of Mickey ears she made for our trip.

Even on vacation I tell our story through food. Each day we had at least one “special” meal. Whether it was something simple in a counter service restaurant like Tomorrowland Terrace, which is generally not open during the time we travel to Walt Disney World, or a 5 course meal in a resort hotel the food helps tell our story.

Most of our vacations we try to stay together and do everything together. It is just how our family works. But, we do need some time apart. This time we gave my son a special tour for his birthday present. He got to go on a 7 hour Star Wars Tour at Disney Hollywood Studio. Star Wars is not something my daughter or I really care too much about, though I do know far more about it because of my son.  So, I let her plan a day just for her while they were on the tour.

When it was time for lunch I asked her where she would like to eat today. We could leave the parks and go to one of the hotels or go to another park. But, she chose The Tomorrowland Terrace because it usually is not open when we are in Walt Disney World. This is one of the restaurants that Disney opens only during peak season to take up some of the overflow. Because it is only open during peak season we have not eaten here in probably 12 – 13 years.

The restaurant is a counter service restaurant and counts as 1 counter service meal on the Disney Dining Plan. The meal is one entrée (with a side) and a drink. They had some really interesting choices that I wanted to try such as the Smoked Sausage Sandwich and the Pulled Pork Banh Mi Sandwich.

I chose the Smoked Polish Sausage Sandwich with whole grain mustard and roasted onions. This is served with a choice of apples or house made chips. This was served on a pretzel roll. The sausage had good flavor but there was too much mustard for my liking. I ended up wiping about 1/2 of it off. Next time I will ask for it on the side. I loved the addition of the onions. Overall I was pleased with the sandwich and would order it again.

My daughter chose the Angus Cheeseburger on a pretzel roll. The burger was a good size and well cooked. My daughter LOVED the pretzel roll. She said it was fresh and very different from the usual white rolls the hamburgers are served on.

The house-made chips were for the most part crispy and well done. Every once in a while we would get a chip that was not well cooked but overall we really liked them. I was wishing for some malt vinegar to sprinkle across the top of them to add another depth of flavor.

The best part of eating here was the view. We were able to get a table on the lower level near the edge of the terrace. The show “Mickey’s Royal Friendship Faire” was just beginning as we sat down. Although we could only faintly hear the music it was nice to sit and watch the show and see the little fireworks at the end which made everyone jump in surprise.

We will definitely be trying this place again because I want to try the Banh Mi Sandwich.