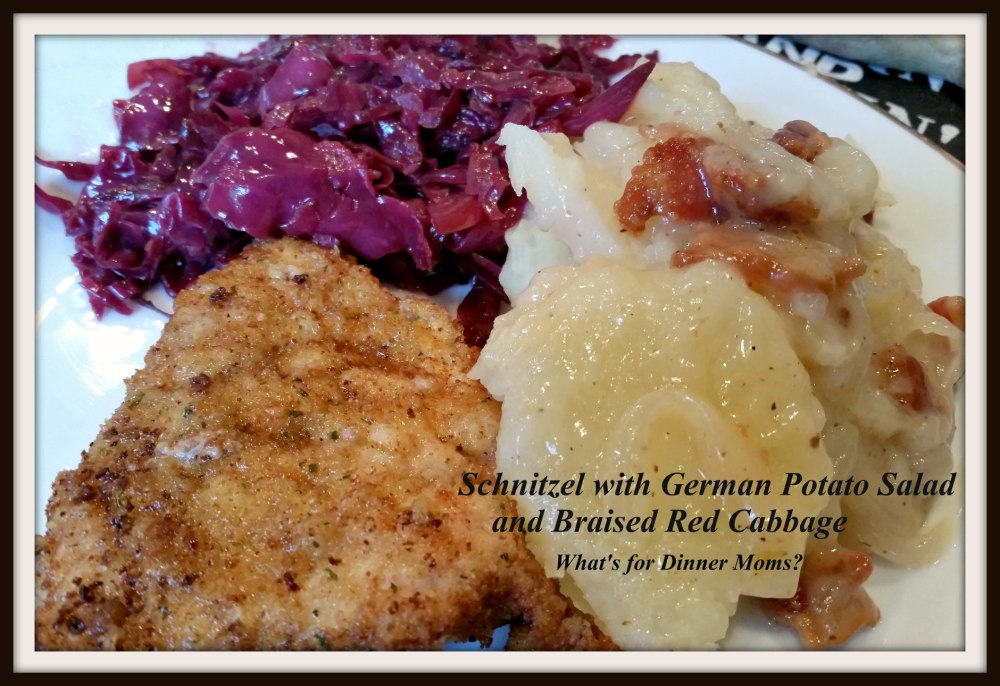 My daughter’s birthday was two months ago. For her birthday dinner she had asked for a German dinner.  But, because times were busy then we took her out to dinner with the promise that we would make her a dinner later. Well, later finally rolled around the other night.

I had taken her out for a German dinner in the mean time. She learned she loved spaetzel. Thought the sausages and braised red cabbage were very good. But, she was very disappointed in the potato salad. Throughout the dinner she kept saying, “Your potato salad is so much better than this!”

The recipes for the German Potato Salad and Braised Red Cabbage can be found by clicking on the links. Both dishes are two of my all time favorites. If you like Apple Cider Vinegar you will love these dishes.

When trying a new food I generally tend to try to find the history and a bit about the food. Schnitzel has a varied past depending on who you believe. Most sources cited it coming from Austria but several also mention that they believe it came from Italy and then spread to Northern Africa and Southern Europe. If you look at most food traditions many of them have some form of Schnitzel (meat pounded thin, battered and fried) even if it is not called Schnitzel. Think Parmigiano or Milanese.

The most popular forms are pork or veal (Wiener Schnitzel) but can be made with chicken, turkey or lamb. The pounding down of the meat and being served with fresh lemons  are a throwback to its history. They used the fresh lemon juice to cover any rancid taste from the pork or oil due to lack of refrigeration. The pounding of the meat was done so that a smaller pieces of meat looked larger and could be divided more easily among the troops they were feeding.

The whole meal was amazing! This was our first attempt at Schnitzel but it definitely won’t be our last. The meat was cooked to perfection and so tender. The best part was it is so easy to cook! I made extra and will have them tomorrow night as sandwiches for dinner. Two meals at once, perfect!

My children have asked for this again and I will be trying some of the other meats in making Schnitzel.

Ingredients: (for one dish – double if you would like to use extra in a second meal)